Barcelona president Josep Maria Bartomeu hit out at Neymar’s lack of loyalty to the club on Monday and criticised the Brazilian for staying silent up until his world record 222 million euro (£201million) move to Paris Saint Germain. 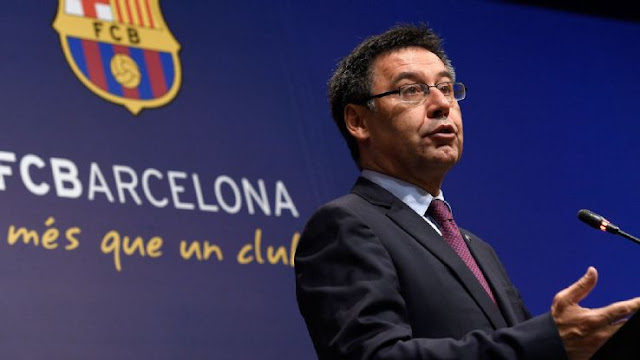 The speculation about Neymar’s eventual move to France overshadowed the club’s pre-season tour of the United States in July and, while his teammates were inundated with questions about the player, the forward made no comment on his future until the move was confirmed last Thursday.
“His way of doing things was not the best, it was not the behaviour we expect of one of our players,” Bartomeu said at Barca’s annual supporters’ congress on Monday.

“We were always clear and we would have liked a bit more clarity from him. Values are very important to us and players need to feel like they are at the best club in the world.“

Bartomeu said the club was now ready for life without Neymar, who scored 105 goals in four seasons with Barca and won two Liga titles, three King’s Cups and the 2015 Champions League.

“No player is above Barca, everything has a limit and that is why we did what we did. Messi’s loyalty should be an example for everyone who wants to wear our colours, as should Iniesta’s. We have kept the greatest player ever, Leo Messi, who will continue to lead the team. And we also hope that Andrés Iniesta will extend his time with us and see out his playing days at Barça.“

The Barca chief said the club had suspected Neymar might leave one day when he agreed a new contract in 2016.

“We predicted Neymar could leave so we raised his buy-out clause to 222 million so we would have a stable future. When we started to doubt he would stay, we remained calm because whatever happened would have been good for Barca.“

“If he’d stayed we would have kept an exceptional player, and if he went we’d be able to guarantee we could sign other players.”
Bartomeu added that the team would move away from its recent axis of Messi, Neymar and Luis Suarez, the most prolific front three of all time, to focus on building a stronger team overall.
“Now we won’t be talking about the Barca of the trident, we’ll be focusing more on the team,” he said.
Source Info: http://www.eurosport.com/football/liga/2017-2018/barcelona-chief-josep-maria-bartomeu-slams-neymar-s-lack-of-loyalty_sto6281034/story.shtml
Post Views: 27