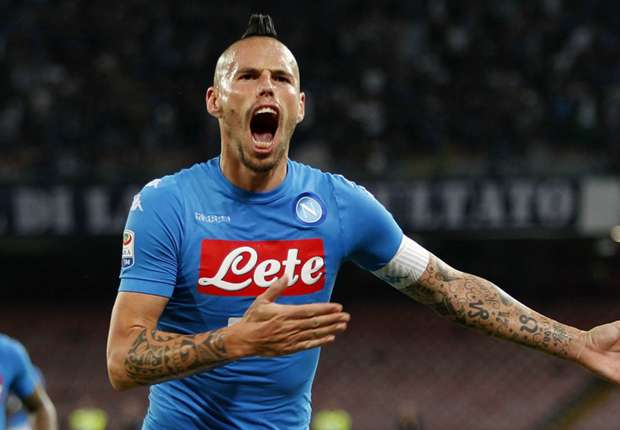 Marek Hamsik has hinted that he may consider joining a club like Manchester United in the future, although he says he is not currently giving any real thought to a transfer.

Hamsik, 28, joined Napoli a decade ago and is now just two goals away from equalling the club record of 115 scored by Diego Maradona.

The Slovakia international enjoys a similar status among Napoli fans, and he has not previously given any indication that he would consider playing for anybody else.
However, when asked by kicker if he would contemplate a switch to United, he said: “That’s hard to say.

“It would definitely be the hardest decision in my career. Maybe everyone wants to play at these clubs, but I can’t answer that. I think that Napoli are one of the top 10 European teams in terms of game play and performance.

“As a footballer, it’s hard because you never know what comes next. I’ve still got a long time to go on my contract and I cannot see into the future. I’m not thinking about leaving Naples.”

He had the chance to leave Napoli in the past, but turned down approaches from both AC Milan and Juventus.

“I did not feel ready for it,” he said. “And I also did not want to leave Napoli. I am happy to be in this city.”

His priority right now is catching Maradona as the club’s all-time scorer, and then trying to emulate the Napoli legend by lifting the Serie A title with the side.

“I really hope to beat his record because Maradona is a God in Naples so it would be amazing to be ahead of somebody like him,” Hamsik said. “To see the name ‘Hamsik’ in front of ‘Maradona’ would be fantastic.

“But obviously I cannot be compared to him. It would be crazy to break that record and win the Scudetto with Napoli in the same year. Let’s say that I’d be happy enough to beat Maradona’s record.”

Zlatan Ibrahimovic and Michael Carrick have contract decisions on the horizon

Still my desire to play for Real Madrid – Paul Pogba